Eradicating terrorism and extremism from society is the top priority of my Government. We have made many interventions that include review of policing, integration of intelligence services, revamping of Counter Terrorism Department, prison reforms, introduction of technology, improving access to justice, effort to eradicate thana culture and introduced balanced development in the province as immediate measures under a comprehensive counter terrorism strategy. The long term reforms include de-radicalization of society, poverty reduction strategy, madrissah reform policy, legal reforms, establishment of Danish School System, reintegration of Dissidents and expanding coverage of Health Care initiative (CMPHC) in Punjab.

Establishment of Punjab Forensic Science Agency is a concrete step towards materializing a tolerant society by assisting courts in disseminating speedy justice. Punjab Forensic Science Agency has been completed in a short span of two years. It is providing forensic services in fourteen forensic disciplines. Integration and unification of all forensic services under one roof will reduce chances of mishandling, manipulation, deterioration and contamination of evidence. The scientific analysis undertaken at Agency will assist investigating agencies in successful investigations and replace oral evidence with the empirical testimony in courts of law. Reliable evidence will be available to improve conviction rate. It will reduce the nominal justice gap in Punjab. The robust independent status of the Agency will ensure transparency in handling and processing of evidence. Excellence in human resource employed at the Agency is our prime focus. We have young scientists trained in forensic sciences from United States of America and appointed a Director General of the Agency who has worked for 35-years in different forensic facilities abroad. We are also endeavoring to engage international experts as mentors in different disciplines of the Agency.

We have initiated the process of modernization of archaic Criminal Justice System to achieve good governance, dispensation of justice and establishment of a modern, tolerant and just society in Punjab. I look forward to public participation and encouragement for achieving these noble pursuits. 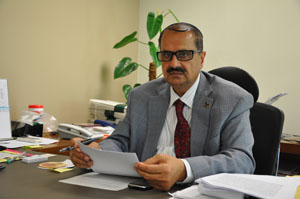 The establishment of Punjab Forensic Science Agency in Punjab marks new era in our national history. Being a full service, state of the art Forensic Laboratory, having 14 disciplines under one roof is one of few of its kind in the world. PFSA is an innovative, sophisticated, transfer of technology project spreading over 53Kanals. It is fixed cost first of its kind project constructed on Engineering Procurement and Construction (EPC) Mode. Its structure civil works, mechanical, electrical and Air Conditioning System (HVAC) are unique and without any parallel in Pakistan. The establishment of a Forensic Laboratory of this size usually takes 5 to 7 years in developed countries, whereas here this huge task has been completed in a remarkable time less than 3 years due to continuous support and personal interest of the Chief Minister Punjab Muhammad Shahbaz Sharif. Punjab Forensic Science Agency is functioning according to international standards. With this, now the provincial government for higher level of justice confidence and trust due to PFSA’s accurate and authentic forensic results. The change from eyewitness testimony to scientific physical evidence testimony is colossal in our Judicial System. Human can lie, forget, can be threatened to appear in the Court and can be frightened from the Crime Scene but physical evidence is always present at crime scene, as a silent witness. A well qualified and properly trained scientist can with his / her knowledge make this silent witness speak in the Court of Law. I am confident that if we remain committed and focused to this valued task with the same pace and zeal, then InshAllah a day will come when we will be able to see a crime free society.